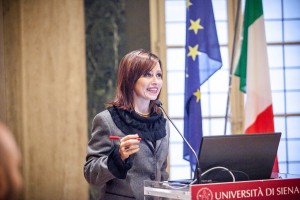 During my university studies I worked for newspapers both in the Italian regions of Tuscany and Sicily (publishing hundreds of magazine and newspaper articles); for a television as broadcaster and press reporter (making television news and reports); I worked for a publishing house (in 2009 I wrote a book called “Cari nipoti”, biography of the wife of an Italian Ambassador, Antonio Venturini. The book was released in the diplomatic world and partially published by the Italian Embassy in Shanghai).

In 2002, I was inducted as a member of the National Journalists of Tuscany. In 2004 the University of Siena chose me as press officer and journalist and I worked for the editorial and communication staff of the Dean of the University of Siena. For the Academic year 2011/12, I worked in USA as Italian language assistant for the Department of Italian Studies of the Scripps College (Claremont Colleges, California).

In 2012, I obtained a new position at the International Place of the University of Siena. Since then, I have been serving as “Assistant of international students”. I was able to be assigned to this office thanks to the work experience I previously had in USA and thanks to the new domain expertise I have reaped in the intercultural and linguistic fields, especially regarding the international young students.

Although in 2012 I became the Assistant of international students of the University of Siena, I never neglected my passion for the journalistic activity, as I have been the director of a magazine called EDIC (Europe Direct  Center) Siena,  since 2012. Please, see the hyperlink underneath for details:

Work experience in Italy and abroad

Starting from 2008, I have gained long-standing experience abroad: in Ireland, I worked as a journalist for the Limerick Institute of Technology; then I went to London, for a period of training. There, I successfully attended the London School of Journalism to further advance my English language competency through the study of intrinsic topics pertinent to journalism and rhetorical writing. I also worked and got training in other European countries (Luxembourg, Brussels, Portugal) and Turkey (Istanbul). One of the most significant turning points in my career certainly occurred during the professional experience I had in USA: in 2011–2012, I worked as Italian language assistant for the Department of Italian Studies of the Scripps College (Claremont Colleges, California) for one academic year (almost 200 students). My role as a tutor was instrumental for the American students to develop conversational skills and to practice a whole variety of activities intended to convey to them the tools they needed to become proficient Italian speakers. To complement it all, I started producing with them the newspaper “A lezione di italiano”.

The newspapers were written entirely by my Italian language students, with a short summary in English to facilitate the readers (such as students’ relatives) who did not know the language but were interested in the articles. It was an interesting experiment appreciated by students, teachers, and parents alike.

In order to grow professionally in the teaching field, I studied, in the US, “Pedagogy of teaching a foreign language” and “Teaching and learning process” whereas, back to Italy, I continued my studies at the “University for Foreigners of Siena” where I got the certification “DITALS Level II” for teaching Italian to speakers of other languages. Since then I have taught Italian language courses in basic, intermediate and advanced levels at Italian language schools in Siena and in private contexts all around Italy.

During my teaching experience, the majority of the students I taught were college level Americans, Indians and Chinese students. I have also been teaching Italian language (and culture) to adult learners, the majority of whom are tourists and/or immigrants in Italy.

The “Italian Language in the Media” approach

The studies and the research I have conducted in the field of journalism–as well as my experiences in teaching Italian language to foreigners–led me to the conclusion that the media, particularly newspapers, can be really important for the development and settling of the language skills of the learners. This is especially true when considering the contemporary use of the language.

With that vision in mind, in Italy, in 2015, I invented a teaching approach called “Italian Language in The Media”. My intellectual property has been recognized by the “Ufficio Italiano Brevetti e Marchi (UIBM)”. I own all the exclusive rights associated with my invention as it pertains to its use within the entire Italian territory.

With the course of my approach, I offer the first and only course available in Italy for improving a learner’s Italian language skills through the use of authentic cultural topics and the media, for the acquisition both of linguistic and journalistic skills. It is a CLIL (Content and Language Integrated Learning) course with a competence-based teaching approach. This course aims to teaching both the subject and the language, which are captured in the phrase “using language to learn, learning to use language”. This is an influential approach that perfectly works, as it simultaneously makes the international students familiar with the Italian media while teaching them the foundational basis of journalistic communication and writing.

The students work on four skills (speaking, listening, reading, writing) focusing on Italian cultural topics and communication through the method that includes several stages: syntactic and logic analysis of texts of journals, interviews, editorial staff for creating newspaper, a broadcast television or radio in the target language. The role play identified as the “game of the editorial office” offers to the students the opportunity to meet, talk, build, and argue in a unique way, which is different from the routine.

In class they communicate in Italian and experience the atmosphere of a real editorial office. For a while, the students may become a journalist of an editorial board of a newspaper, a magazine and a television. Director, vice-director, editor in chief, staff writer, and designer are some examples of whom the new people of the class can be. The linguistic register is formal and informal, according to the roles and the contexts; ‘For and Against’ debates can be used during the editorial meetings. Students produce materials under the “time pressure” typical of the journalistic work.

The “news gathering” for creating the story, finding sources and facts to coming up with a story angle is done on authentic Italian journalistic materials, such as newspaper articles, audio, interviews. Apart from the role play, Italian journalistic texts are decoded for: argumentation (news, society, economy, culture); intercultural aspects; use of specific vocabulary for each topic; morpho-syntactic nature of the texts; phonetic phenomena. Furthermore, journalistic interviews can be decoded in socio-linguistic aspects (extra-linguistic meaning  – facial expressions, gestures and so on – and paralinguistic  – speed and intensity of voice, intonation, etc. -). At the end of the editorial work, students produce newspapers, audio and video interviews in Italian language, thus implementing the use of the second language and learning journalistic techniques.

Nowadays I am working on spreading the Italian teaching and learning approach of my invention around the world and also continuing researching in order to publish a book about this highly innovative learning method. I would like to work abroad – also temporarily – as an academic advisor for Italian Departments and/or Italian Schools.

Besides working at the University of Siena, I am also collaborating with two groups of language schools: the Learn Italy and the Dante Alighieri’ s groups. In Italy, I would be able to organize private visits in real editorial offices, thus giving to the students the opportunity to experience the daily activities of Italian journalists in first person.